Rather than attending tournaments as an ink-stained wretch, I’d like go in style as part of a top player’s entourage. And it’s still not too late for one of my nieces and nephews to turn out to be a tennis prodigy.

Street Tennis is a quick way to check if one of them is hiding a wicked one-hander or monster serve. It’s been 12 years since Andre Agassi and Pete Sampras commandeered the streets of New York City for their Nike “Guerilla Tennis” ad, but it lets recreate the concept – preferably on dead-end streets and driveways.

The balls are soft, low-bouncing, and larger than tennis balls—the kind now in fashion among tennis instructors who work with young children. They also bounce on grass and dirt. 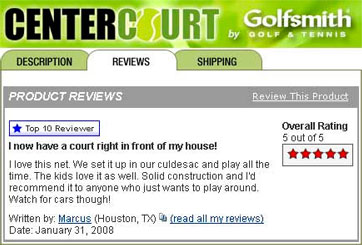 
Play Safe: Street Tennis™ is a branded concept designed to encourage tennis play everywhere. It can be played on a quiet street, in a driveway, on a freshly cut lawn or in a gym. Street Tennis Inc. does not promote or encourage Street Tennis™ play in or near busy traffic areas. All components are built to last, with a 100% - 30 days money back guarantee on normal use.